A downloadable press release for the album launch of Eastern Honeymoon is available here. You can also download the following image in high resolution here. 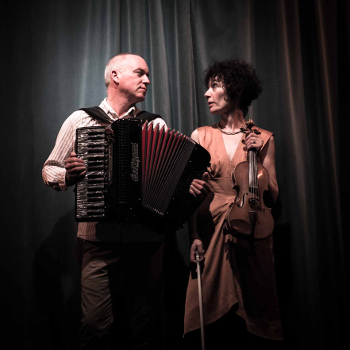 George Whitfield is a self-employed full time musician based in South Wales. George plays piano accordion and sings, he also writes, teaches and provides other musical services such as production of backing tracks and transcription. In addition to his professional work George gets involved locally – he is on the Narberth Food Festival Entertainments Committee, helps out with music at Narberth Youth Theatre and plays for Narberth CP School’s folk dancing group.

George Whitfield has played and recorded with many bands and artists including Peter Sarstedt, Roy Bailey, Pressgang and The Outcast Band. He has toured extensively in many countries from Moldova to the USA and has performed at festivals including Dranouter (Belgium), Jubeck (Germany), SxSW (USA), Glastonbury (UK) and Cropredy (UK).

Helen is a full time musician, who performs, teaches, runs workshops and composes. Main instruments are violin, piano, and voice. She is classically trained but has also spent years studying and performing folk music, especially the Klezmer and Welsh traditions. Special interests are in social and community music making and helping people to discover and fulfil their creative and musical potential.

She plays in duo ‘Fiddlebox’. Based in Wales, they have a packed schedule of around 100 performances each year. Helen also plays in Klezmer band, ‘Klatsh’, who perform at Jewish social events and in festivals throughout Britain. She runs a family band, the ‘Klezmic Rays’, consisting of 7 members of her extended family, who play Klezmer music for community events.

She organises an annual world music festival called Ffestiva! which promotes the diversity of world music that is being created and performed in Wales. She has programmed both Small Nations Festival and Pontardawe festival. She has worked as a community artist, for example on ‘Salt in the Air’ a song writing project in Pembrokeshire in 2011, and a percussion and music writing project with out of education young people in 2012. She runs workshops in Welsh music, and a monthly Welsh tune club. She also leads workshops in Klezmer music, especially for melody players.

Helen has adopted Wales as her home country after a childhood in Oxfordshire, and time studying and working as a musician in the West Country. She has Jewish Lithuanian blood, and two children who now consider themselves Welsh. She has been honoured to represent Wales at the International Congress of Celtic nations in Sligo in 2010, and to be a judge at last years Eisteddfod.